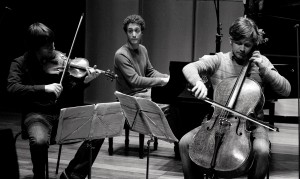 Named after the legendary violinist Adolf Busch, this young piano trio has emerged as the leading British piano trio of the new generation, receiving enthusiastic responses from audiences and critics across the UK and Europe. They won the 2012 Royal Overseas League Competition and several other prizes. The trio has performed in festivals and concert halls around the UK and in continental Europe to critical acclaim, and looks forward to a US tour in 2015. The members of the Ensemble are also soloists in their own right, winning prizes in international competitions.

Mathieu van Bellen plays a violin by J.B. Guadagnini, made in Turin in 1783, formerly owned by Adolf Busch.
The trio enjoys the support of the Tunnell Trust, the Kirckman Concert Society, the Park Lane Group and the CAVATINA Chamber Music Trust for guidance in their educational and outreach activities.

This is their second visit to Wallingford.

Wednesday
08
October 2014
Comments Off on The Busch Ensemble
This entry was posted in Uncategorised. Bookmark the permalink.
Music at St Peter’s is promoted by Wallingford Chameleon Arts, registered charity no. 1021045  |   Website design & hosting by Curly Hosting, Wallingford