You are here: Home » About us » History of St Peter’s church 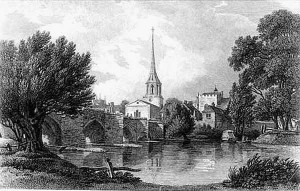 Mediaeval Wallingford, on the main London-Gloucester road and at the only crossing of the Thames for miles around, was a substantial market town with a castle which was one of England’s most magnificent medieval palaces; at one time the town had 11 parish churches. The original St Peter’s was in existence before 1320. In the English Civil War Wallingford was a Royalist stronghold – the Royal court was based at Oxford – and only surrendered to the Parliamentary army in 1646 after a sixteen week siege, during which St Peter’s was badly damaged. 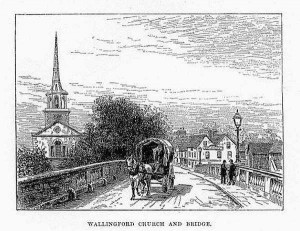 The church was rebuilt in 1760-­69, and the spire added in 1776 to a design by Robert Taylor. Sir William Blackstone, a judge, Fellow of All Souls Oxford, and author of Commentaries on the Laws of England, was churchwarden at the time and played a leading role in raising money for the spire; he is buried in a vault under the church. 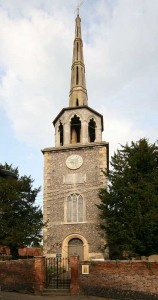 The eighteenth-­century church is a plain rectangle, with a very fine coffered ceiling. The chancel was added in 1904-­5. The stained glass in the East window, by Morris & Co., dates from 1919.

In 1972 the church was declared redundant, and passed into the care of the Churches Conservation Trust. It remains a consecrated church, and occasional services are held there, but its main use has become this series of concerts.

This church has an entry on the Churches Conservation Trust website.