Smetana · String Quartet no.1 in E minor ‘from my life’

The Brompton Quartet was formed in 2018, taking its name from the Brompton Cemetery where they gave their first performance. They achieved almost instant success by winning the St Martins-in-the Fields competition, which has led to a series of concerts in London and around the UK. 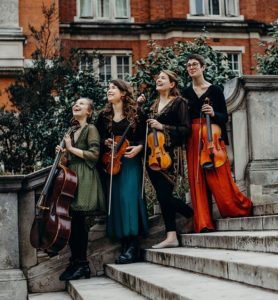 Mozart wrote his six ‘Viennese Quartets’, including K.168, in 1773; they show the influence on the young composer of quartets by Haydn.

Smetana’s public career as the foremost proponent of Czech music was cut short by the onset of deafness, but he was able to continue composing; his string quartet no.1 is a powerful tone picture of scenes from his life.

Eye o’ da Hurricane was written in 2017, inspired by a poem by Christian Tait.

Dvořák, a professional viola player, wrote chamber music throughout his life. His G major quartet is a late work, composed shortly after his return from America in 1896.