Dominic Degavino was educated at Chetham’s School and the Royal Northern College of Music, continuing his studies at the Guildhall School in London, and has achieved considerable success in competitions. He has performed as a concerto soloist and in piano recitals at major venues around the UK. In addition to his solo work, he is a member of the Mithras Piano Trio, an accompanist, and a jazz pianist. 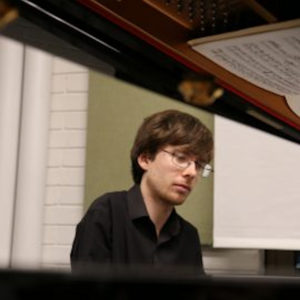 Beethoven’s Op.109, one of his last piano sonatas, is an intimate and lyrical work whichtakes a free and original approach to the traditional sonata form.

Roberto Gerhard (1896-1970) was a Catalan composer, who studied piano with Granados and composition with Schoenberg. He spent most of the last 30 years of his life in England, where he wrote the ballet Don Quixote based on the story by Cervantes.

In 1851 Clara Schumann wrote in her diary that Robert had written “three piano pieces of a very serious, passionate character, which greatly please me”.

Debussy’s twelve Préludes each have a descriptive title, and include ‘The girl with the flaxen hair’ and ‘The drowned cathedral’.

This concert is supported by the Countess of Munster Musical Trust.