Beethoven · Sonata for Cello in A, Op.69

Franck · Sonata in A major

Indira Grier has recently completed a Masters degree at the RCM, and has already won a number of international prizes. 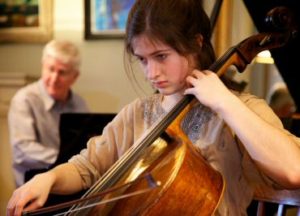 She has been performing as a soloist since the age of twelve, and enjoys playing chamber music with a number of groups, including the Grier Piano Trio with her father Francis and violinist sister Savitri.

Francis Grier has enjoyed a distinguished musical career. He was organ scholar at King’s College Cambridge, and was appointed Organist at Christ Church, Oxford at the age of 25.  He now divides his time between work as a psychoanalyst and music as pianist and composer.

Beethoven’s richly melodic sonata, Op.69, was written in the same year as his 5th and 6th symphonies and is headed “Inter Lacrimas et Luctum” (Amid Tears and Sorrow). The Cello Sonata by Shostakovich is an early work, a lively piece which shows influences of Bach and Mozart.  Franck’s celebrated Violin Sonata was arranged for cello and piano by his friend Jules Delsart, with the composer’s approval; indeed, the work may have been originally conceived for cello.