The Thames Consort brings the season to a close with Handel’s dramatic and colourful work for soprano, tenor and bass soloists, choir and orchestra. 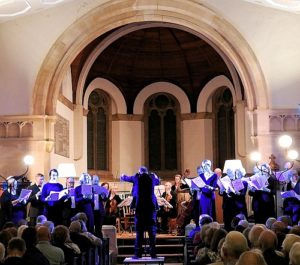 Alexander’s Feast, or The Power of Music, was written for London in 1736;
the great success of the ode encouraged Handel to move from writing
Italian operas to English oratorios.
The libretto is based on a poem by John Dryden. The scene is a great
banquet held by Alexander the Great and his mistress Thaïs to celebrate his
defeat of the Persian king, Darius; Alexander’s bard, Timotheus, is able by
his singing to move Alexander to various emotions until finally he incites
him to burn Persepolis down in revenge for his dead Greek soldiers. Finally
St Cecilia descends and lifts the mood from barbarity to a higher plane.
Handel’s music vividly brings to life all the conflicting passions of the story.

Handel incorporated two concerti as interludes in the work – one for harp, and one for organ – which were subsequently published as part of his Op.4 set of organ concerti.